As you know, we are in the process of renovating our whole house from top to toe. This started with a single storey extension to the back of the house which was completed earlier in the year, then hubby has been gradually working his way through the downstairs. We now have four completed rooms and are currently renovating the kitchen. All of this has not been without it’s problems, but it is possible to install your own kitchen and still be able to eat, if you follow these steps. 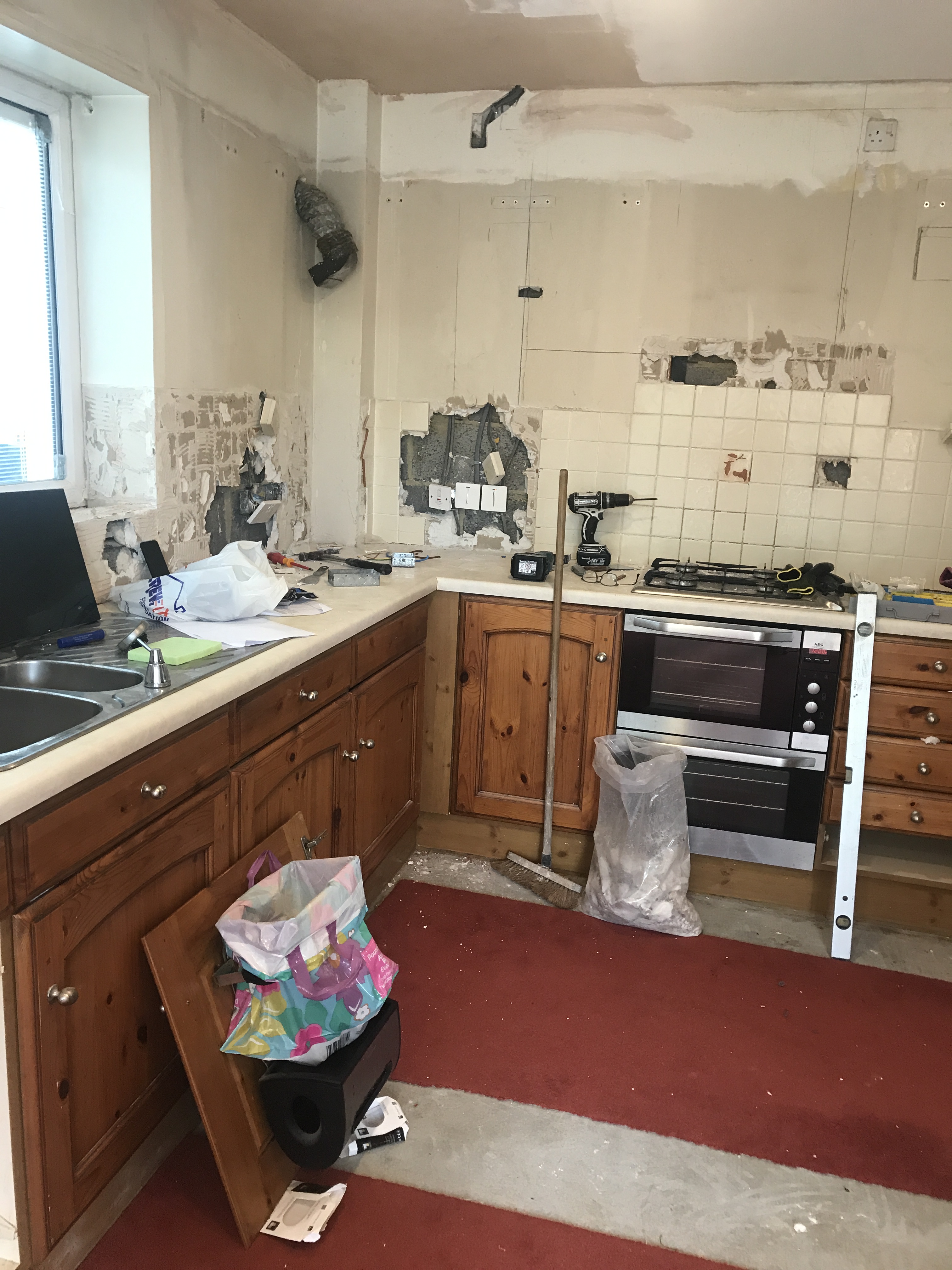 We are fortunate enough to have a large laundry room where we were able to store the contents of the cupboards and still have everything accessible. 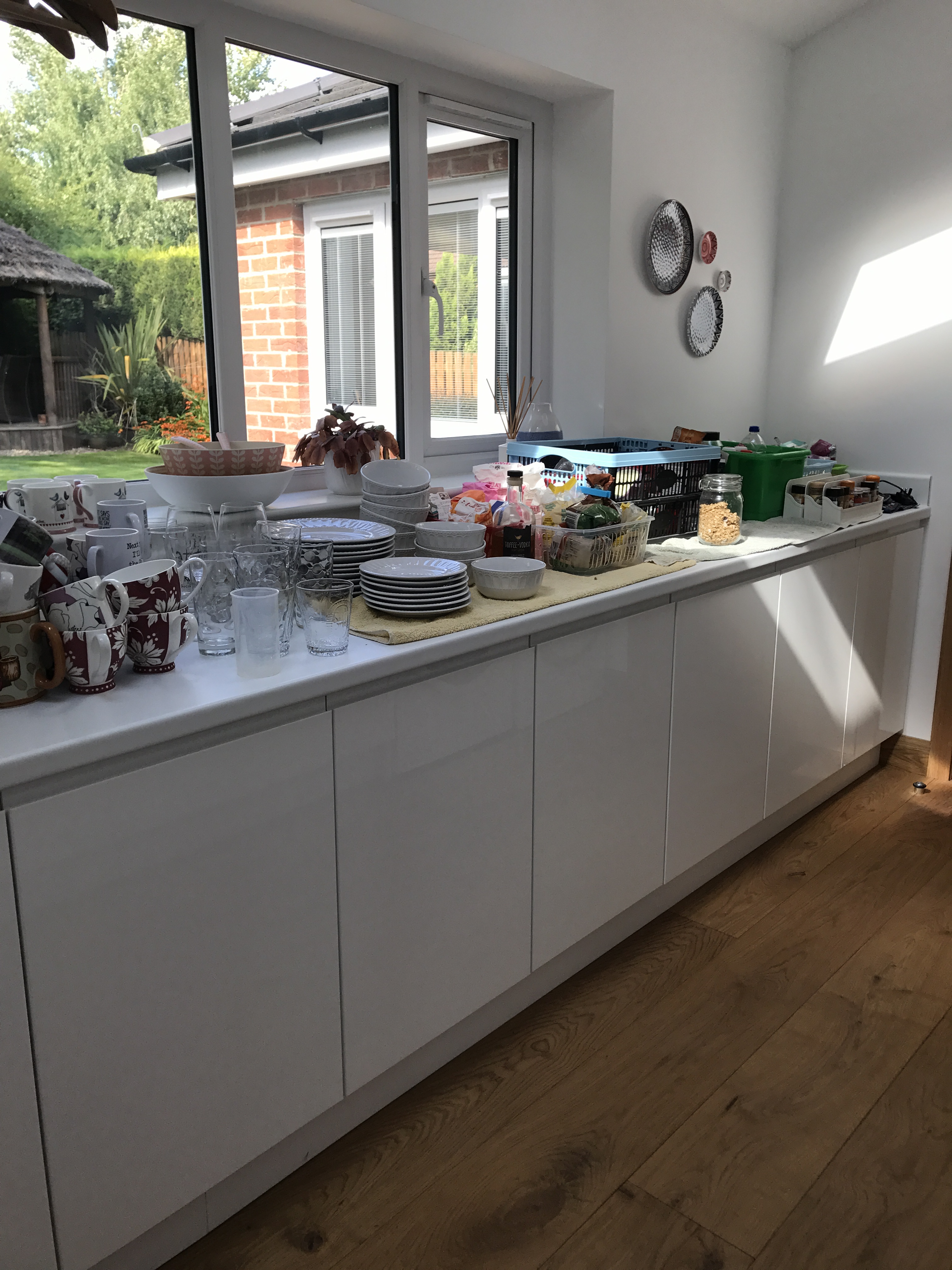 If you have to pack everything away, make sure you leave the more essential kitchen items, such as cups, kettle and teabags easily accessible!

2. We then had to arrange for a gas safe engineer to come and take out the old gas hob, as this is something hubby isn’t able to do himself. Once this was done, hubby installed our new hob. You do need to be a qualified electrician to do this, so you may need to arrange for gas and electric people to be on site same day if you want to use your hob facility.

We went for this induction hob from Neff and it is amazing – I can’t recommend it enough! It’s available here. 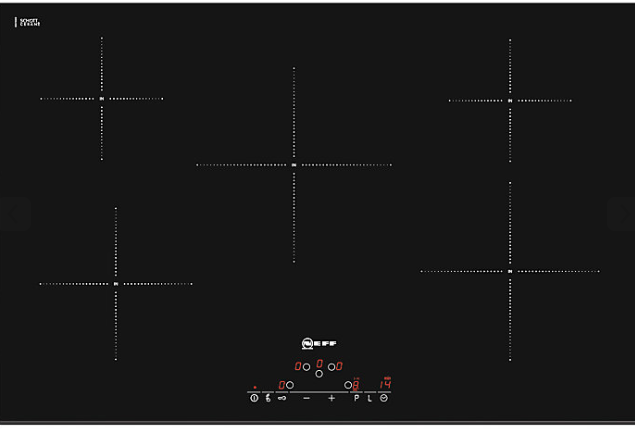 3. Before we could install any units, we decided we needed to fit the oak floors. This was necessary in our case because hubby wanted to insulate under the wood, which meant the new base units would have to sit on top of the wood. 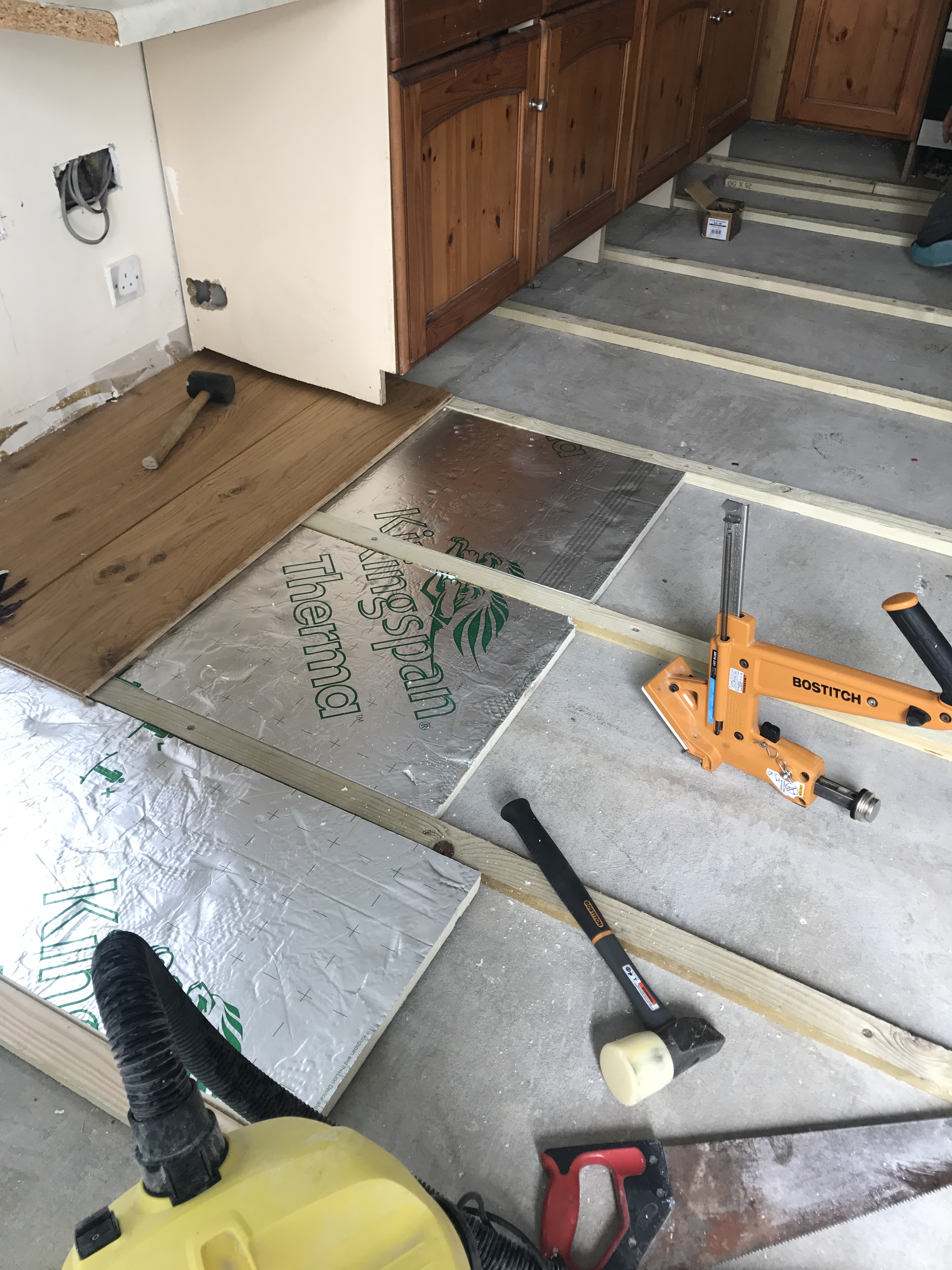 To protect the floor while we were  working in the kitchen, we simply covered it in very attractive (not!) old carpets. 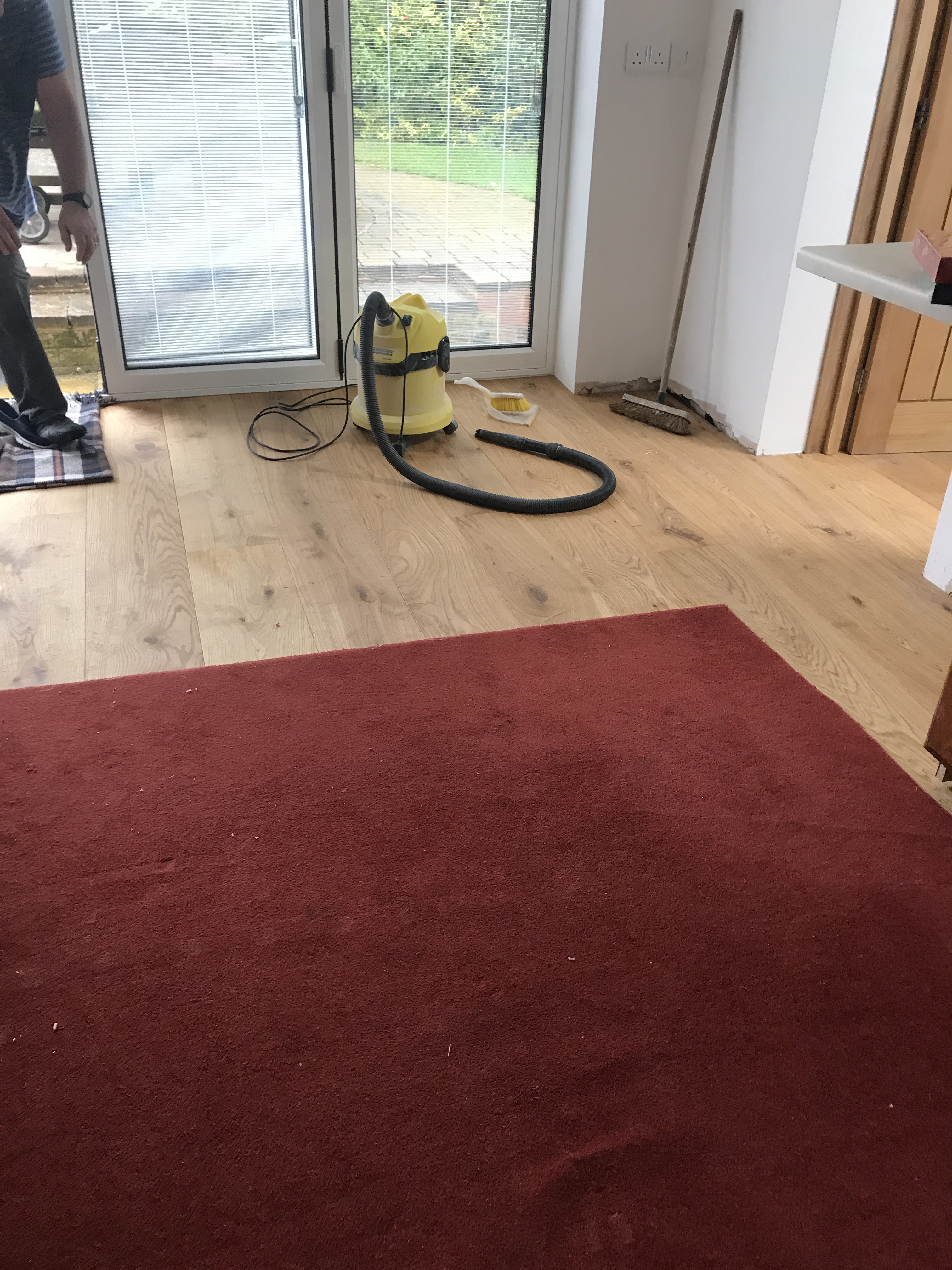 4. Now for the exciting part; installing the first of the new units. The first one to go in was the oven housing, which meant removing the old oven and the base units at the back of the kitchen. I think this was the only day we had to get take away as the tall housing unit and all the electrics for the two ovens took longer than we thought! 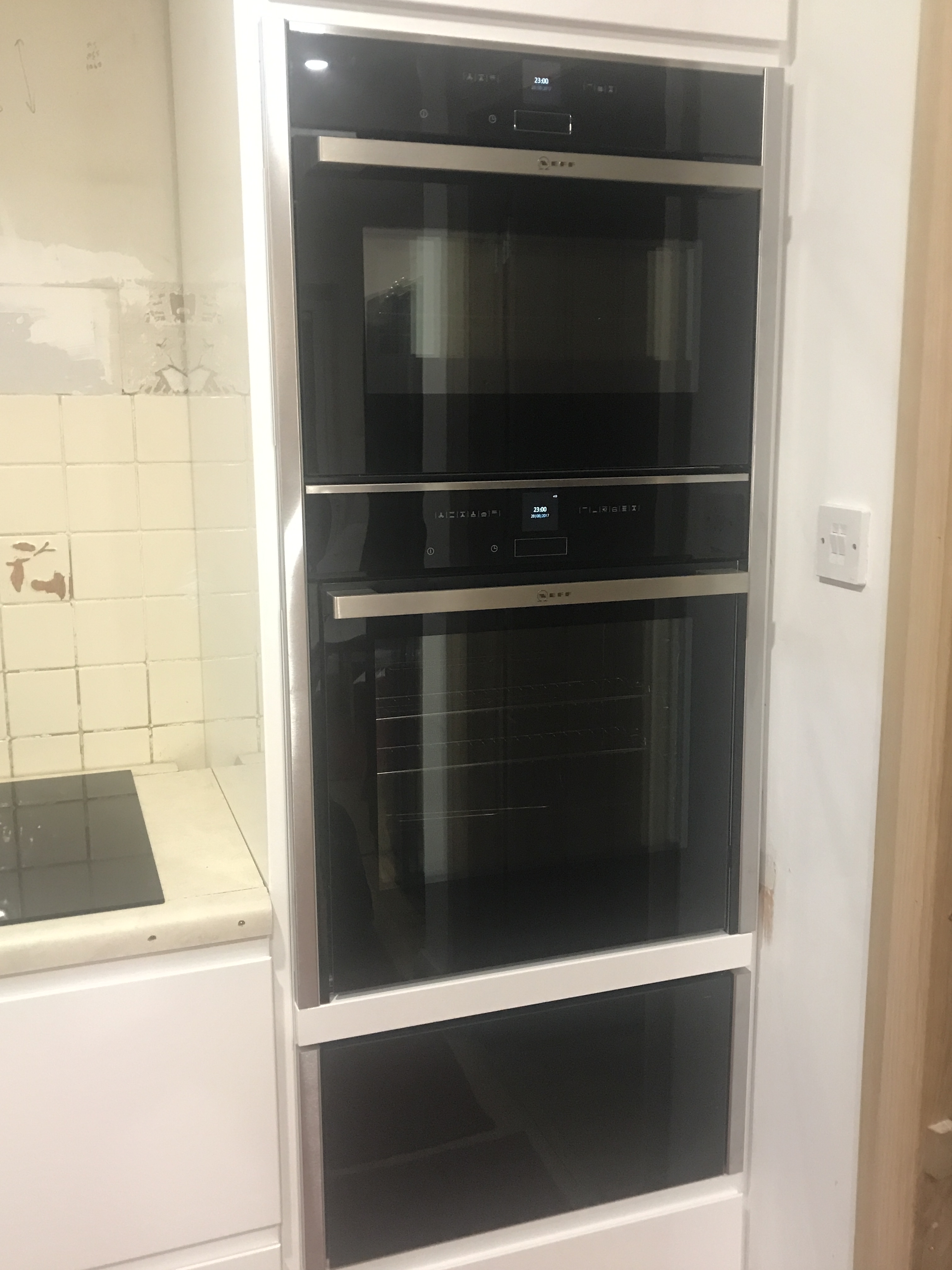 5. As you can see above, as hubby continued to fix the base units into place, he utilised the old worktop by cutting a hole for the new hob so we could still use it. He also did the same with the kitchen sink, which will be replaced when the new quartz worktops are fitted.

We now have all the base units in place, so most of the work left shouldn’t cause too much disruption! 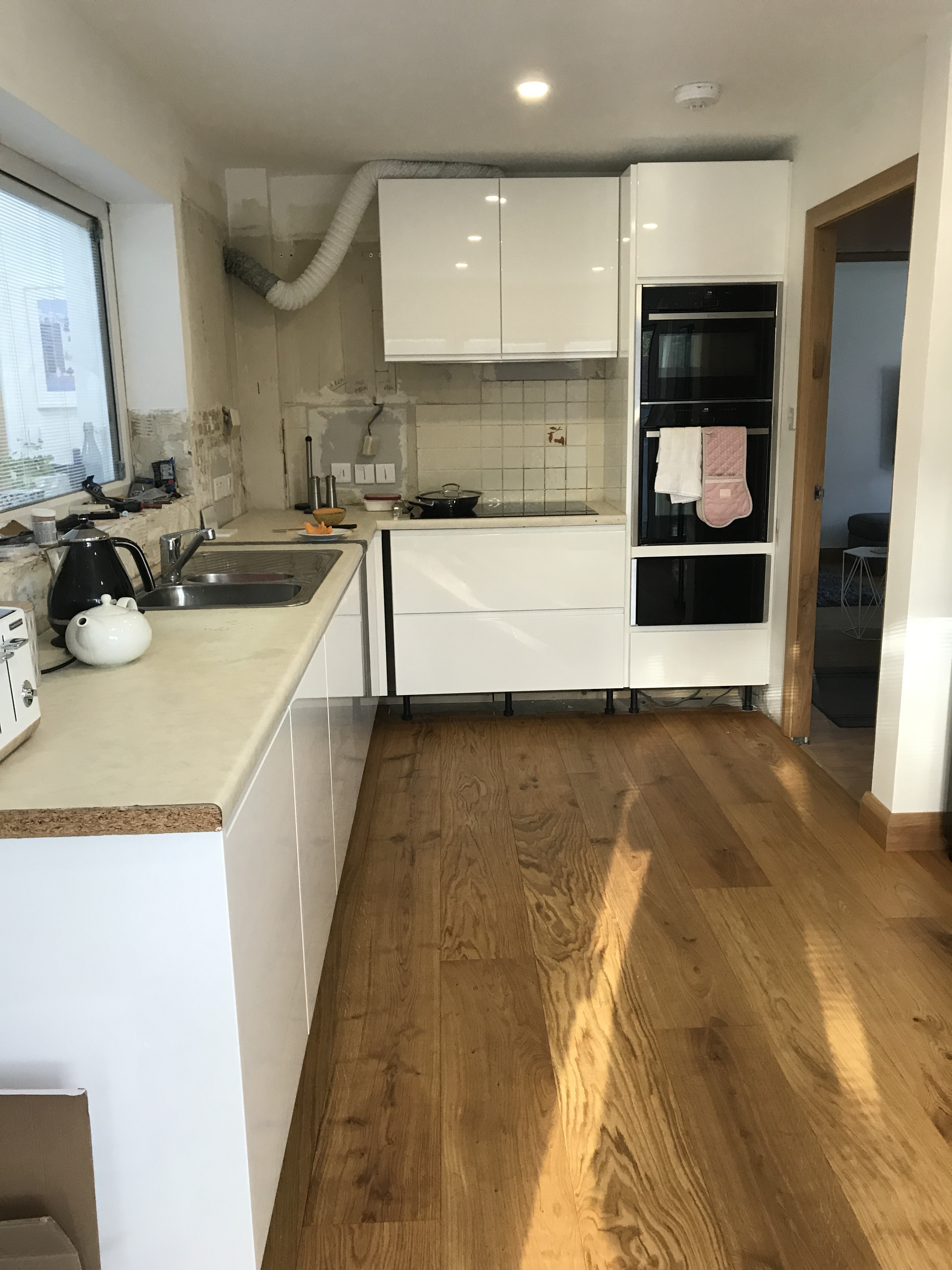 One of the trickiest parts so far, was oiling the oak floor to protect it. This needs to be done at least twice and has to dry for 10 hours in between coats. We thought it best to do this over night so we tried to be  well prepared and take everything out of the kitchen that we thought we would need for the evening and breakfast. We took tea, milk, the kettle and toaster and even butter. When we got up the next morning, the floor was still a little tacky so we couldn’t walk on it. It wasn’t until I came to make the toast that I realised id forgotten one vital thing – bread! So the moral of the story is to be prepared!

3 thoughts on “How to survive a D.I.Y. kitchen renovation”